Put simply Cowden Syndrome is one of a number of tumor related disorders linked to the PTEN gene. They all fall under the the term Pten Harmatoma Tumor Syndrome, the PTEN gene is one of a number of tumor suppressor genes. They are as important as they sound, our bodies are remarkably clever and have both on switches and off switches. Our cells need to know when to grow, when to heal but also they need to know when to stop. An on switch and an off switch. With Pten disorders the off switch doesn’t work properly, this means benign and/or cancerous tumours can grow at any point. Don’t let the word benign fool you either, simply because a tumor isn’t cancerous does not mean it is harmless. A “benign” tumor in the brain can be fatal “benign” tumors clustered around nerves can cause extreme pain at the worst the loss of a limb. Even the good side of Cowden Syndrome is fairly obnoxious.

The general risks are shown below. 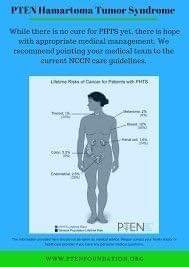 My daughter has Cowden Syndrome, it caused her to have thyroid cancer at 10 and have her thyroid totally removed. She, after the cancer never fully recovered and was later diagnosed with chronic fatigue syndrome and postural orthstatic tacychardia syndrome. She has also developed crushing anxiety and OCD as a result of all that happened to her. My middle child, the brother closest in age to her started to take drugs as a way of coping with the upset of his sister having cancer. I had no idea at the time. He now is dealing with substance dependency issue. Over a few years our family has been to hell and back all due to a faulty gene.

My daughter spends an inordinate amount of time in hospitals having checks and making sure there are no issues. She had 5 biopsies taken from 2 breast lumps just 4 days ago. I find it hard to put into words how difficult it is to see your 14 year old having breast biopsies. But this is her reality. I am just so grateful we have the NHS so any issue can be looked at.

My hope is that eventually a cure will be found, that one day kids like my daughter won’t have the near certainty that one day they will have cancer. That they won’t know from age 10 before they even had breasts that they will need a double mastectomy in order to keep them safe. Before she had even reached puberty we knew this. It was a horrendous revelation.

This is why I am fundraising, last year I undertook a year of 260 workouts, this year it’s a year of giving up 2 substances linked to cancer in the genetically normal population (it needs to be noted that very little can reduce the risk in those with gene defects).

Any money I raise during the second year of fundraising will go here :-