I haven’t been logging these weekly on here as I was at one point but I have been uploading it all into my fitness Pal. So here’s a whole month in one go!!! 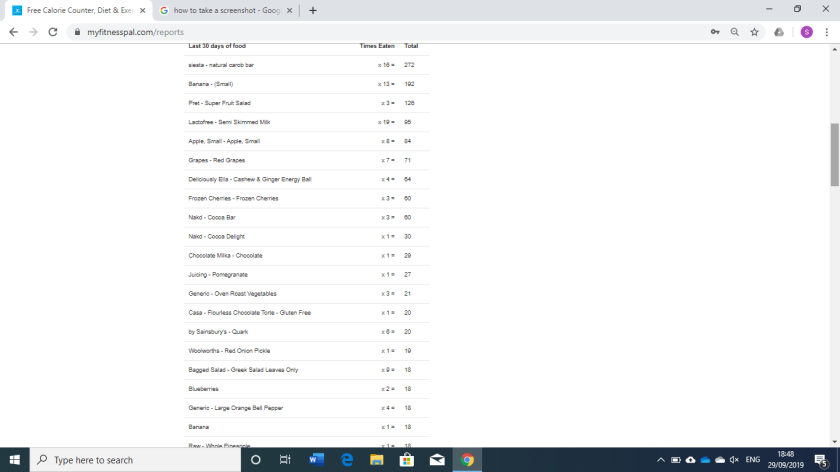 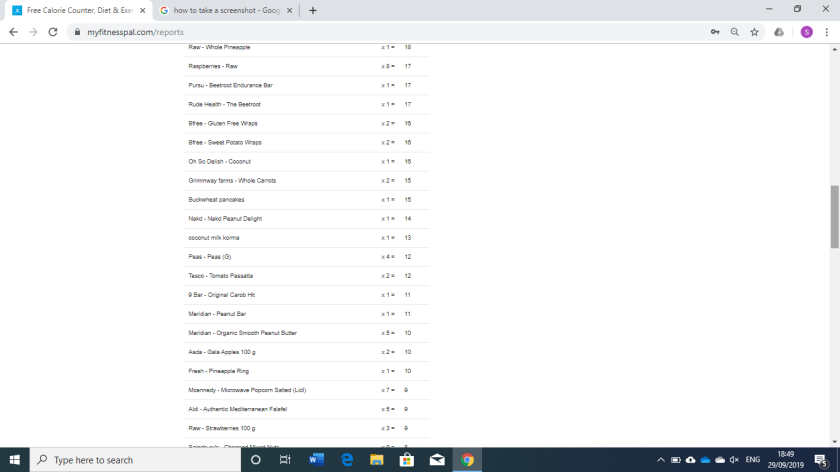 If you find anything of interest or use in my blog please consider sponsoring me and help work towards a cure for Cowden Syndrome. Thank you. 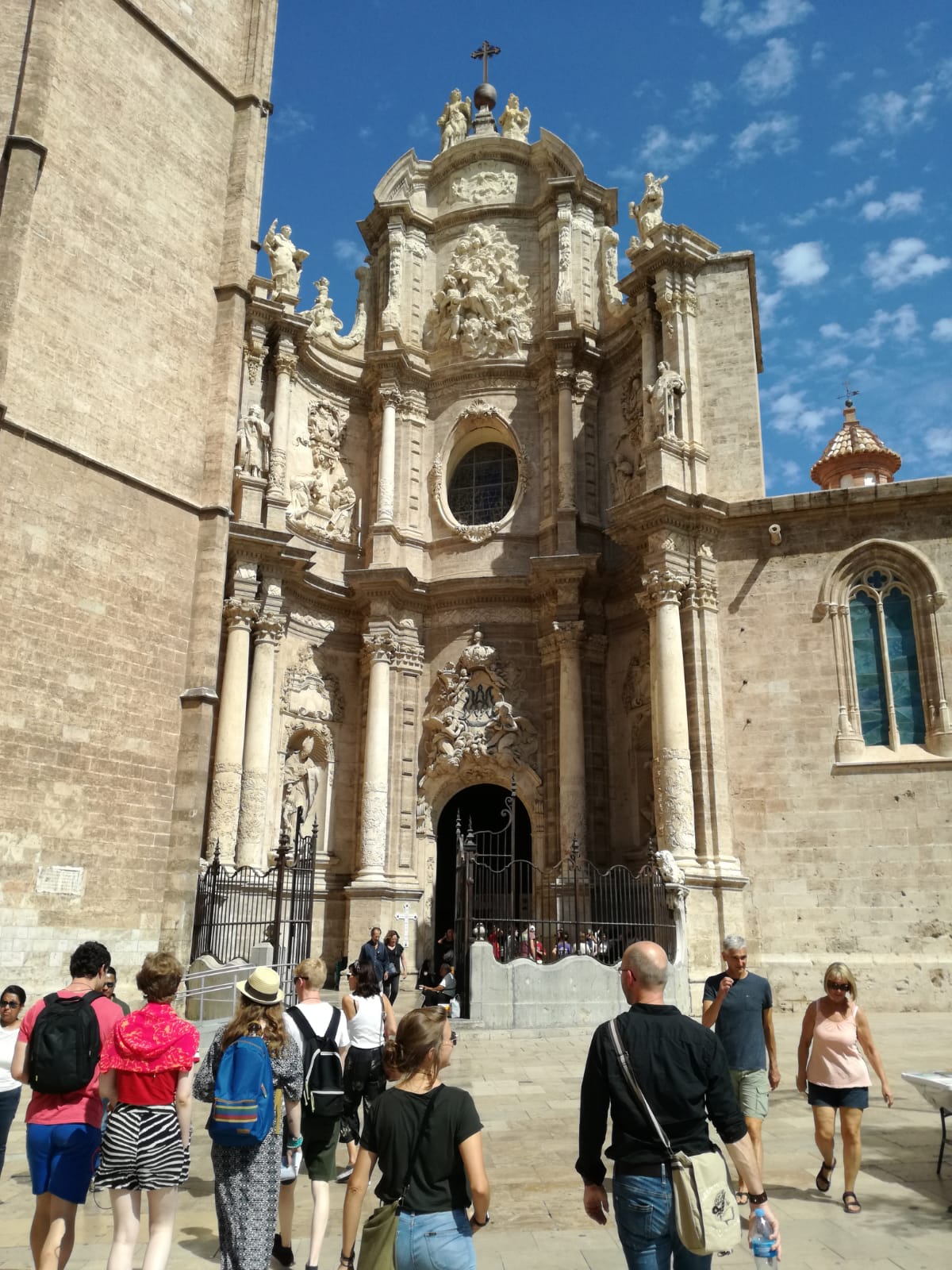 We arrived in Spain rather tired and bad tempered and ready to kill each other. It wasn’t the earliest start in the world at 4am but early enough if like some younger Kelly’s you forget to go to bed till 1am! The villa was not disappointing nor is the area, both are beautiful. In the villa we have 2 downstairs apartments and a 3 bed flat upstairs, a pool to ourselves, 2 different outdoor eating areas, 4 balcony areas, can I just live here please?

The grumpiness mainly settled by the next day Sean and I attempted to go for an early run didn’t quite manage it out of the villa fast enough so hit the promenade at around 11.00 yes folks me you friendly neighborhood pasty red head was running in Spain in the middle of the day. After 3 miles I felt rather wobbly and found a cafe. I figured Sean would find me eventually. The rest of the day was spent in the pool enjoying the Villa and exploring Calpe, the older part of town is particularly beautiful.

We decided to chill for the morning, no running but I swam for an hour then we explored Benidorm, I’ve never been on a package holiday but of course Benidorm is famous as a resort for the party life. It was huge fun visiting almost like a British seaside town but actually sunny! I must admit I’m glad we are in the quieter town of Calpe. Later on Monday while in the pool James managed to crack Sebastian in the face with a pool net, you know the kind that is used for fishing leaves out. The poor guy has a black eye so bad it looks like he’s wearing eye liner!

We spent most of it by the pool and at the beach, that is what we are here for after all the views of mountains continue to take my breath away, it’s the first time in a long while when I’ve been on a holiday where I don’t want to go home.

I even braved going out in a bikini for the first time, oh in at least 2 decades!!!

While here I’ve been trying to keep up with exercise, running 5k in the morning and swimming for an hour some time during the day. Right now I’m sitting in a cafe after finishing my run which somehow was my fastest ever 5k in ridiculous heat!!! I think the cafe at the end helped !!!

It’s about 90 minutes drive from where we are so seemed well worth the effort. The city itself is stunning though driving past the bull ring was a reminder of cultural differences. We didn’t have a set agenda as ots tricky with Charlotte we don’t know how well she’ll cope. We had a fabulous lunch which of course I had no idea how to ask what was sugar free, gluten free was hard enough. I somewhat suspect that if I’d been asking for a gluten free sugar menu in an Italian restaurant in Spain they’d have thrown me out. I’ll pay £20 penalty into the fundraising, as I knew I was paying the penalty I had 2 glasses of wine, and cake. I wanted my money’s worth for a day off the challenge!!!

It’s an absolutely beautiful city and I wish we could have spent more time there.

We did have a chance to pop into a CrossFit box and pick up a t- shirt for Seb and I. It was on his must do list! There were such lovely people and have Seb a few tips on how to get double unders. 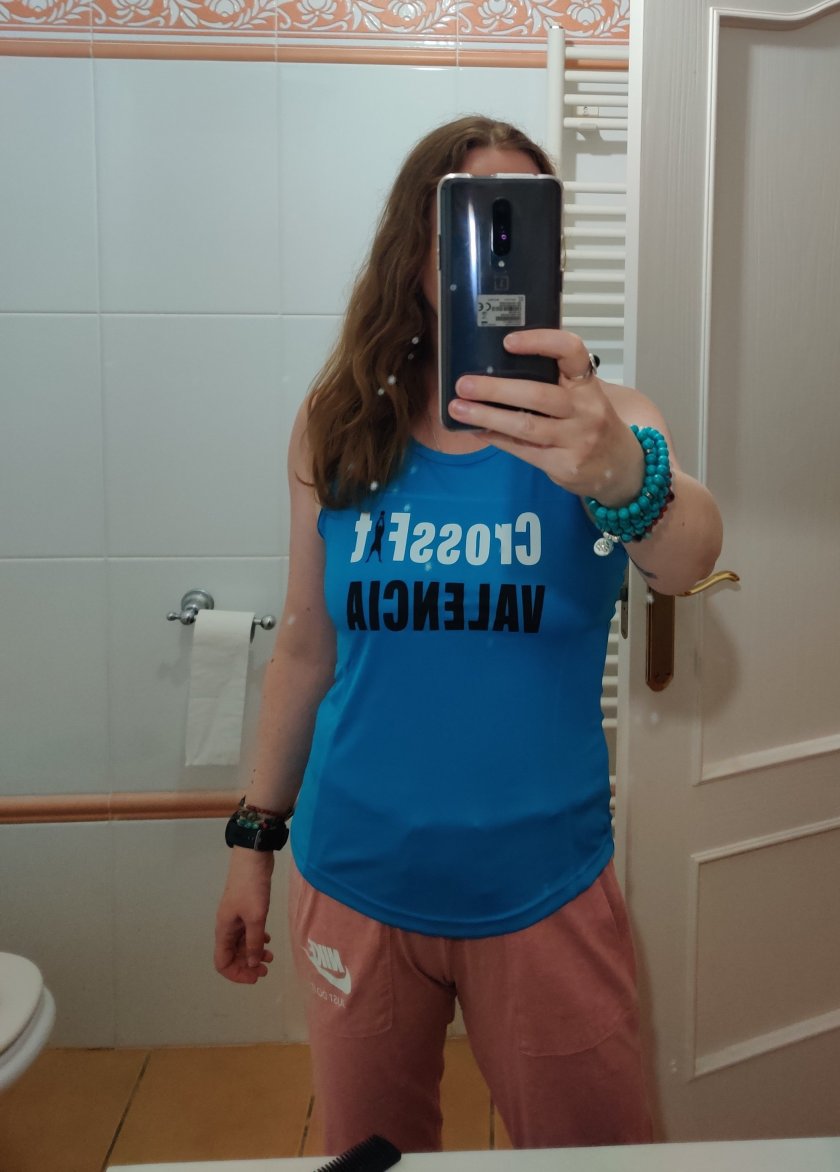 A day spent in Calpe, a run in the morning a hike in the afternoon followed by a swim.

Spent recovering from overdoing it in the heat on Thursday!

Home time!!! Jasper was pleased to see us! 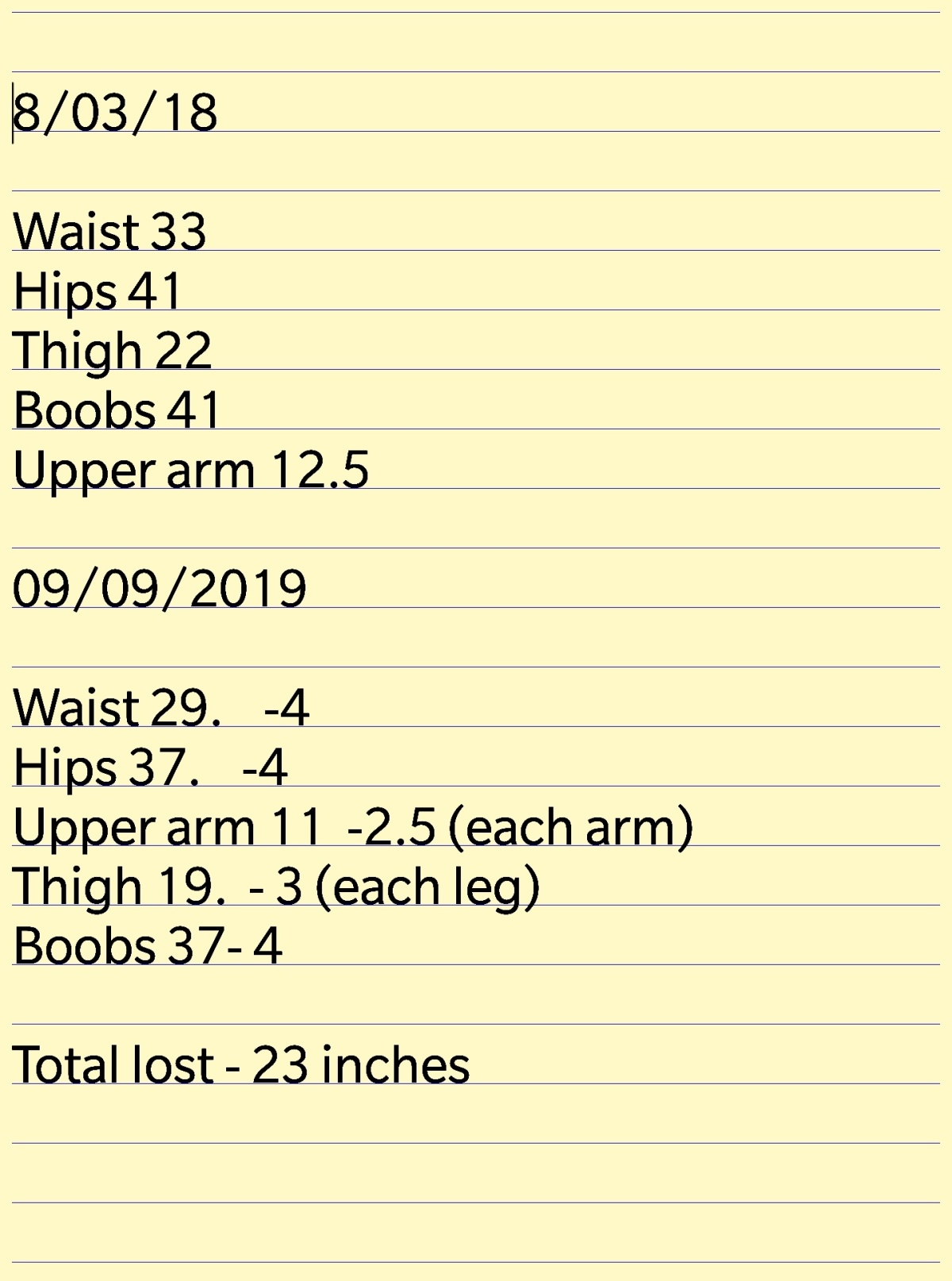 One of the first questions I get asked is if I’ve lost weight over last year’s challenge and this year’s. Now although that wasn’t the aim the answer is absolutely. At a slow and steady rate. I don’t actually weigh myself but I do measurements and I know I’ve gone down a couple of dress sizes which for me usually equates to a couple of stone. In total since the beginning of my first challenge (CrossFit) I’ve lost 23 inches of the main measurable areas, of course I will have lost a bit from everywhere. With the sugar and booze free year I don’t necessarily think it’s the lack of those two that have made me lose weight rather the avoiding those two means many less impromptu calories and many more sensible decisions made.

It’s been a week or so, mainly because I’ve been crazy busy and the chance to sit down and catch up didn’t happen. Then it seems more daunting how to begin and where to channel my thoughts. As you know I had been feeling rather down, I got caught in the trap of where my life “should” be of course which means by societal standards. Which is usually a crock of shit. But it involves ticking various boxes, get a spouse, have kids, own a house, have a car, decent career, get a promotion, better car, live through your kids, even better car, fancy holiday. It never ends, it is a fools game, I realise this but sometimes still get sucked in, still feel my worth is not as much because as a carer I am not constantly ticking new boxes.

Any way I have a technique when I get in a fug, I tend to withdraw for a while and read, I focus on inspirational stories. People who have overcome obstacles, this could health wise or most recently abuse, poverty and many other set backs as was the case for David Goggins.

He is in his own words “a crazy motherfucker” not everything in his book resonated with me, but two things that really did were his ability to just keep picking himself up and his focus on self fulfilment. When did self fulfilment stop being important? Living a life to be personally proud of, which very rarely means having the best car because we all deep down know that while shiny things are awesome they don’t fill that deep well of satisfaction that doing something you personally find fulfilling does.

My focus from now on will be just that, on the matters that fill that deep well of longing for actual meaning, teaching Charlotte, spending time with family, seeing friends and it gave me the impetuous to start putting together a research degree proposal. There is a university that is showing interest, I will let you know more as and if there is more to know.

Tricky bit recently, I went to a wonderful 50th birthday party and a beautiful wedding, both I went to sober and sugar free. I have to admit that at the buffet I picked the things that I was fairly certain were sugar free and didn’t grill the bride on the matter. Would have seemed a little dickheadish really. But both occasions nothing but sparkling water passed my lips.

I did have a really tricky few days a week ago where literally all I wanted was to eat chocolate. I wanted nothing more than to dive head first into a family pack of minstrels and devour the lot. I didn’t but it was actually genuinely hard, which I know sounds bizarre but it was.

Onto the hysterectomy, I have after many years of bleeding heavily, painfully and sometimes for half a month had a hysterectomy arranged. My farewell womb date is 4th of October. I am seeing this as a positive step, I am already perimenopausal I really don’t need another five to ten years of heavy bleeding. Of course it’s not to be taken lightly, it is a major op but the consultant seems great, I was in hospital yesterday for biopsies on the endometrial layer which went well. I’m a little “stoned” feeling today and have a sore fanny but other than that all is good.

Which is why I have spent the past few weeks furiously re-decorating my bedroom, it was previously pretty bleak and if I am to spend a few weeks needing rest breaks the environment matters. Anyway thats us all caught up. I’ll post the last two weeks natural sugars tomorrow. 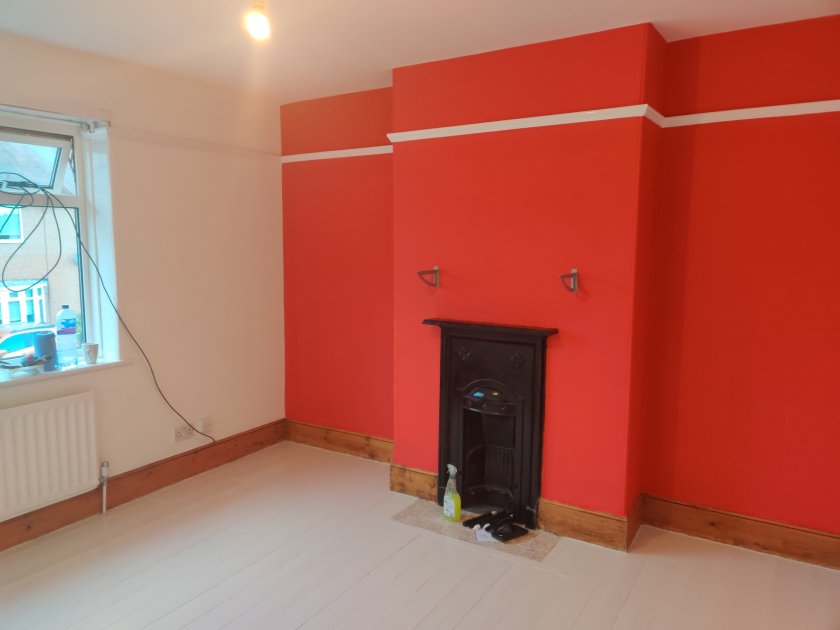 I forgot to do this last week but as it’s all in my fitness Pal it’s not a problem!