My elder son was in CrossFit contest today which we went down to watch for a couple of hours. My younger son came too to support him which was actually really nice. I haven’t spent time with him in a long while and it was pleasant to remember that actually we do get along and have many things in common, sense of humour included. He’s looking really well too which was lovely to see.

The weather wasn’t kind to those competing and seemed to flip from raining to sun and back again. So it was either too hot or drenched through. You can see how wet it is by the reflections! We weren’t close enough and my phone camera isn’t good enough to get decent photos of my son as he was on the far side, but he’s the blue t-shirt on the way over the fence. 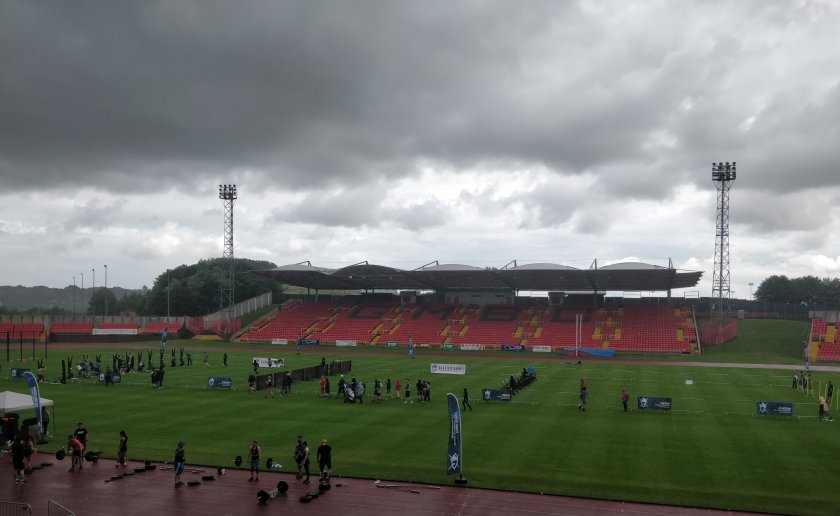 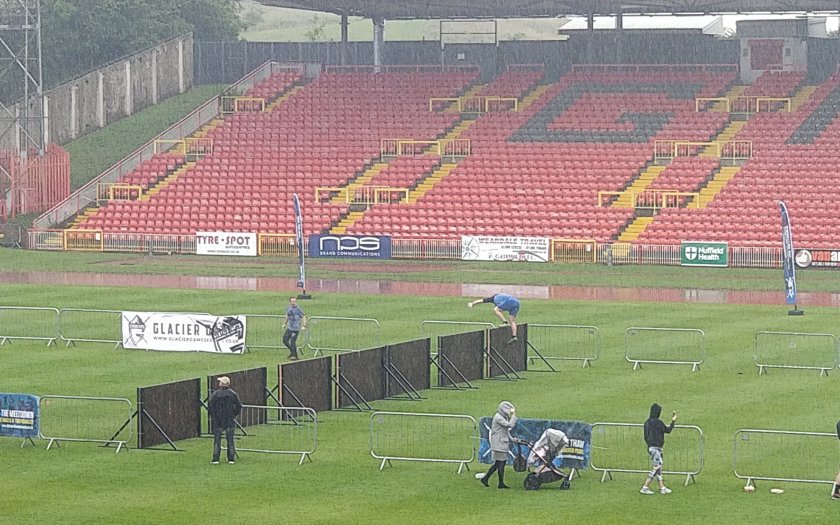 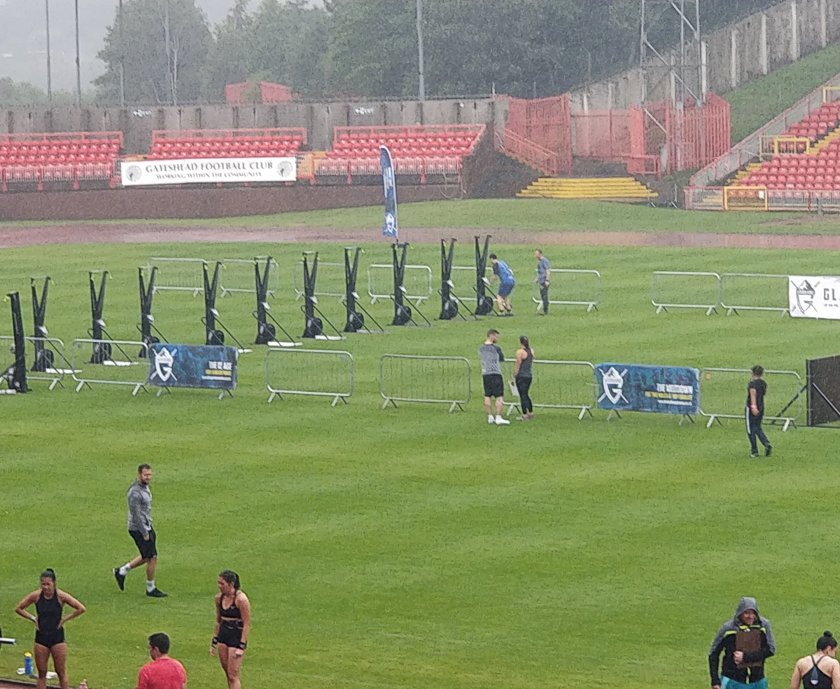 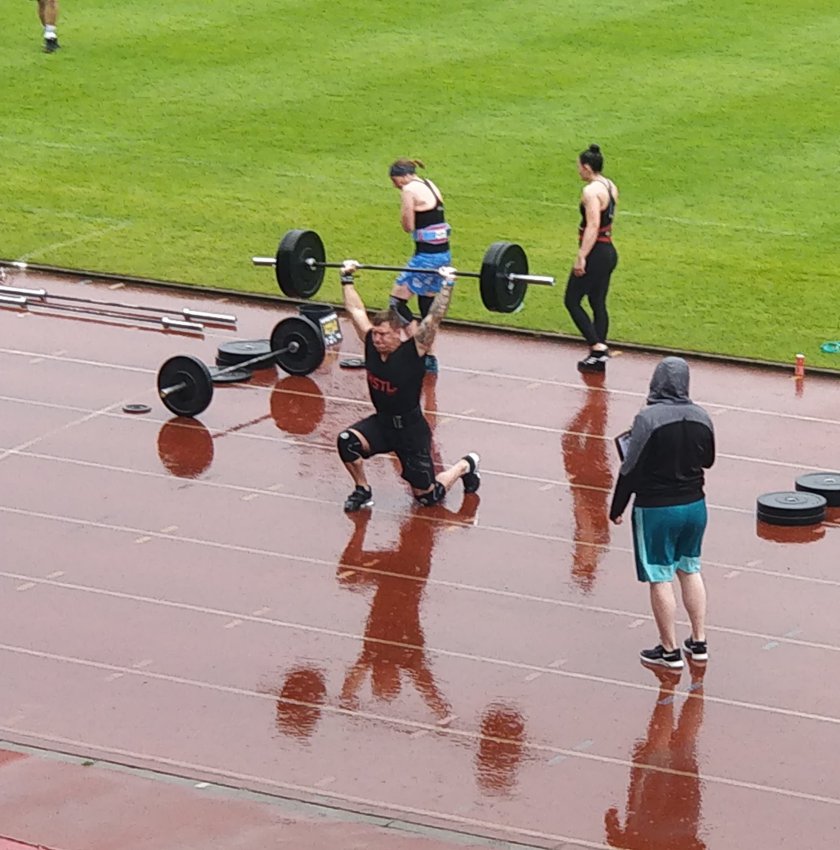 This is a picture of all the competitors from our gym together looking rather damp. My elder son is the slightly taller one with his shirt off. 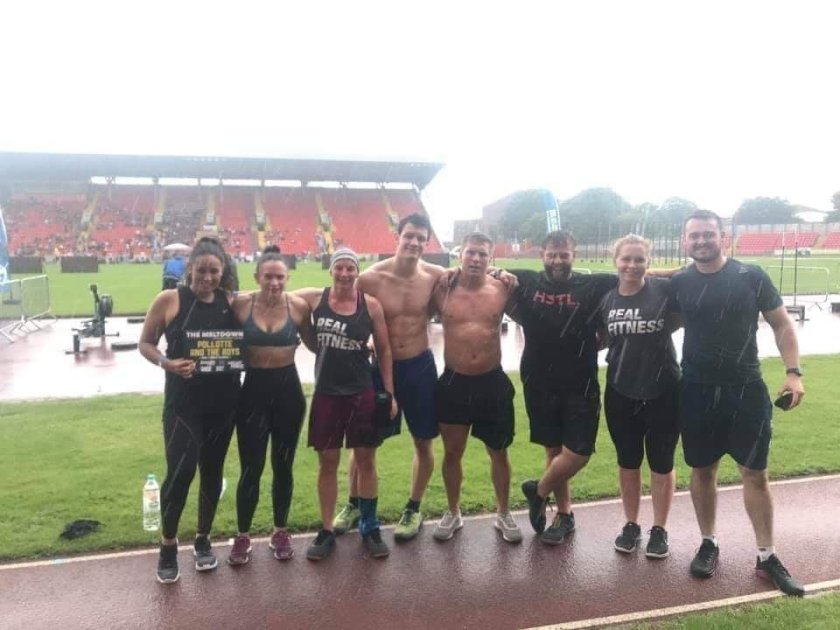 After that it was back to more mundane weekend stuff, washing dog walk etc. I did take Jasper on one of his favourite long dog walks which involves passing sheep, a wood and a castle. Along the way we also saw a family of ducks and a pair of beautiful dragon flies 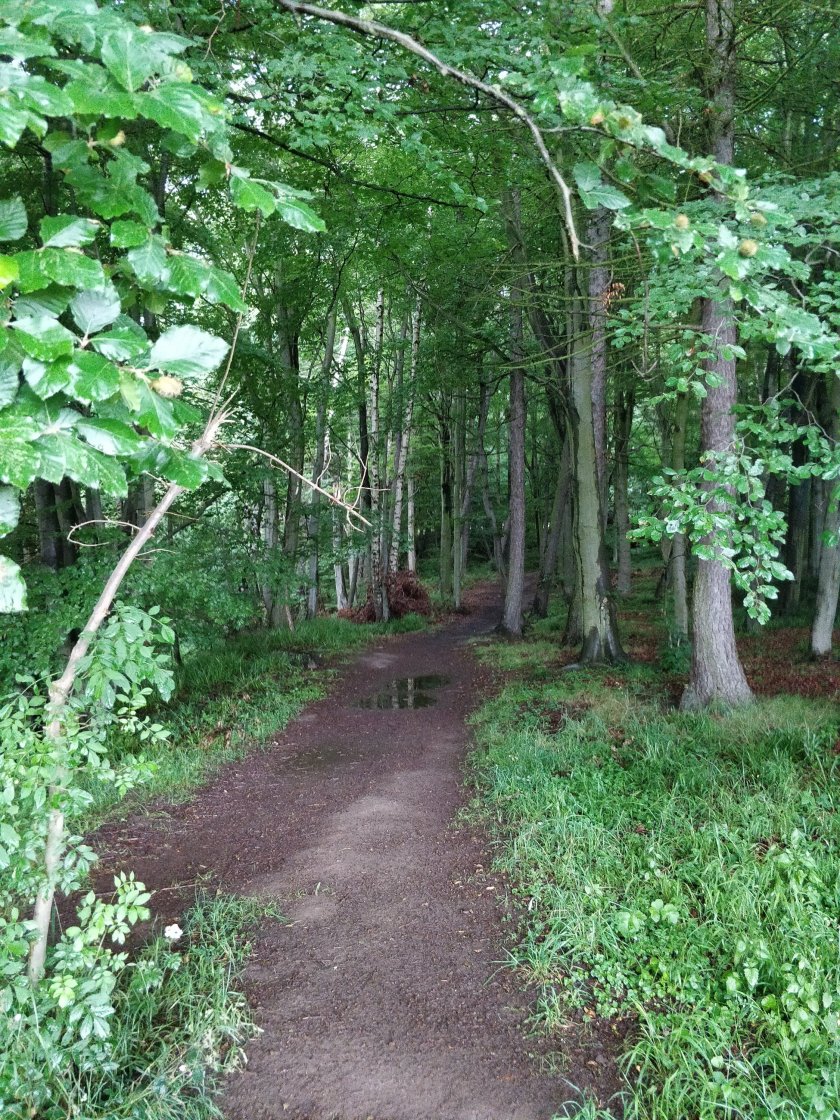 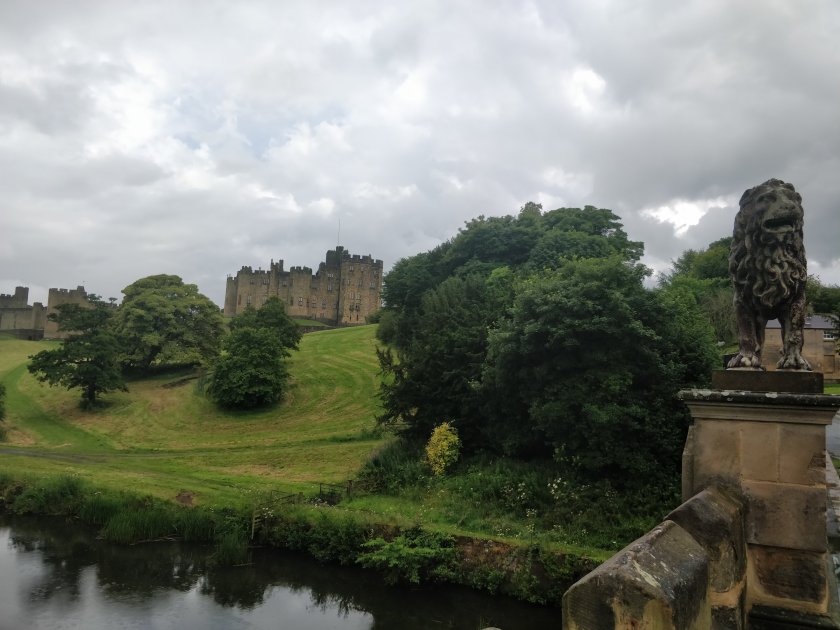 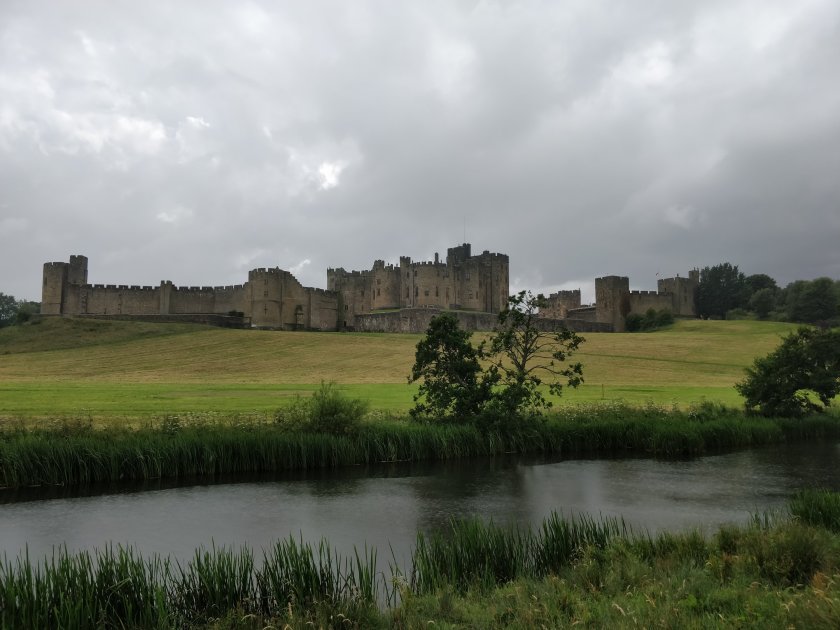 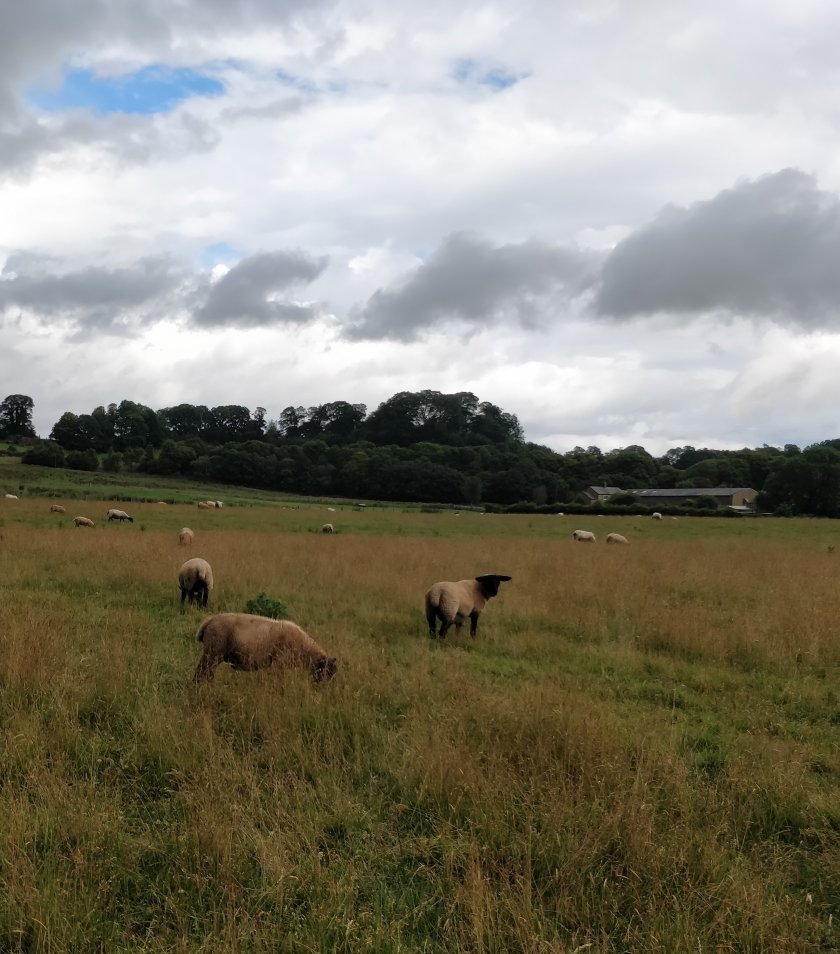 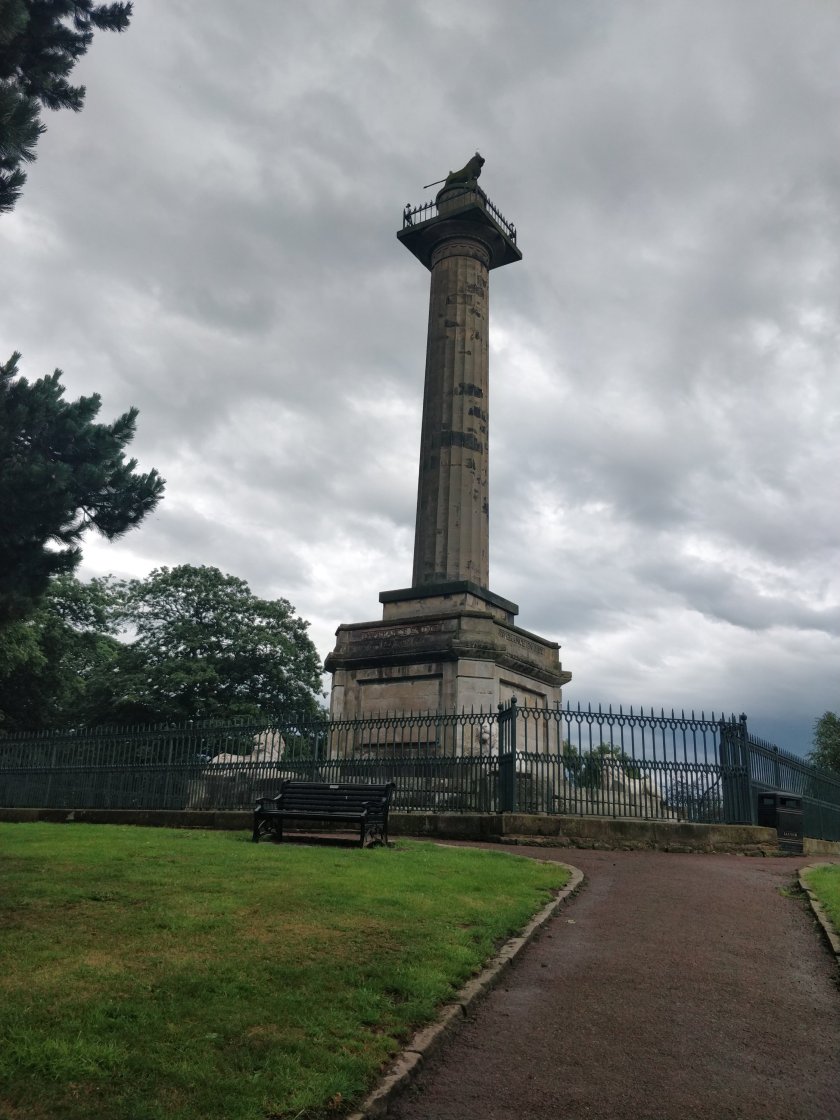 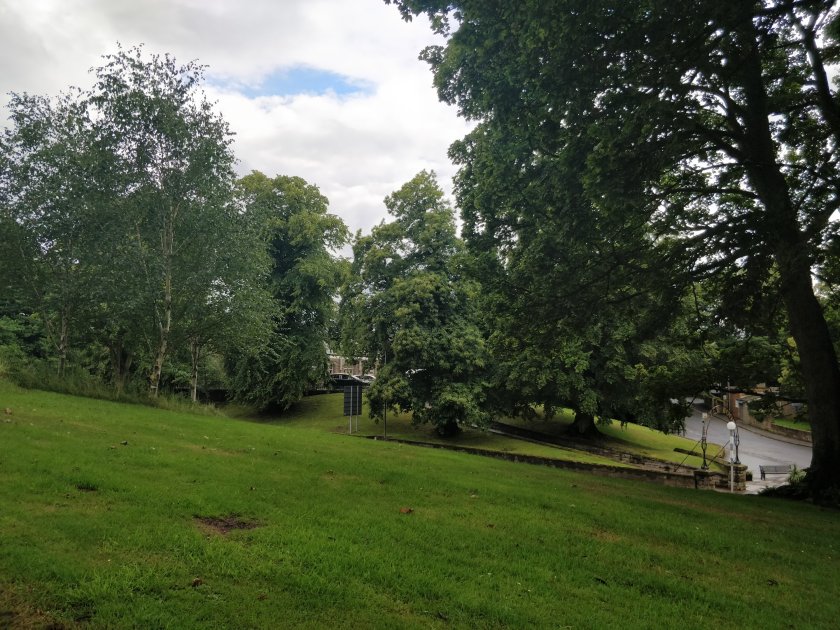 Tonight of course is Saturday evening and I must admit I do like something enjoyable with a film. This week it was cherry and banana “ice cream” (basically blended together) and plain popcorn. Honestly it was amazing fake ice cream especially with extra cinamon in.

My total sugars today were the highest they’ve been since I started this challenge. I’ve had such a headache today and just wanted fruit. As the point of this year isn’t to avoid sugar but refined sugar why the heck not. I’ll be doing a weeks total sugars tomorrow same as last week. 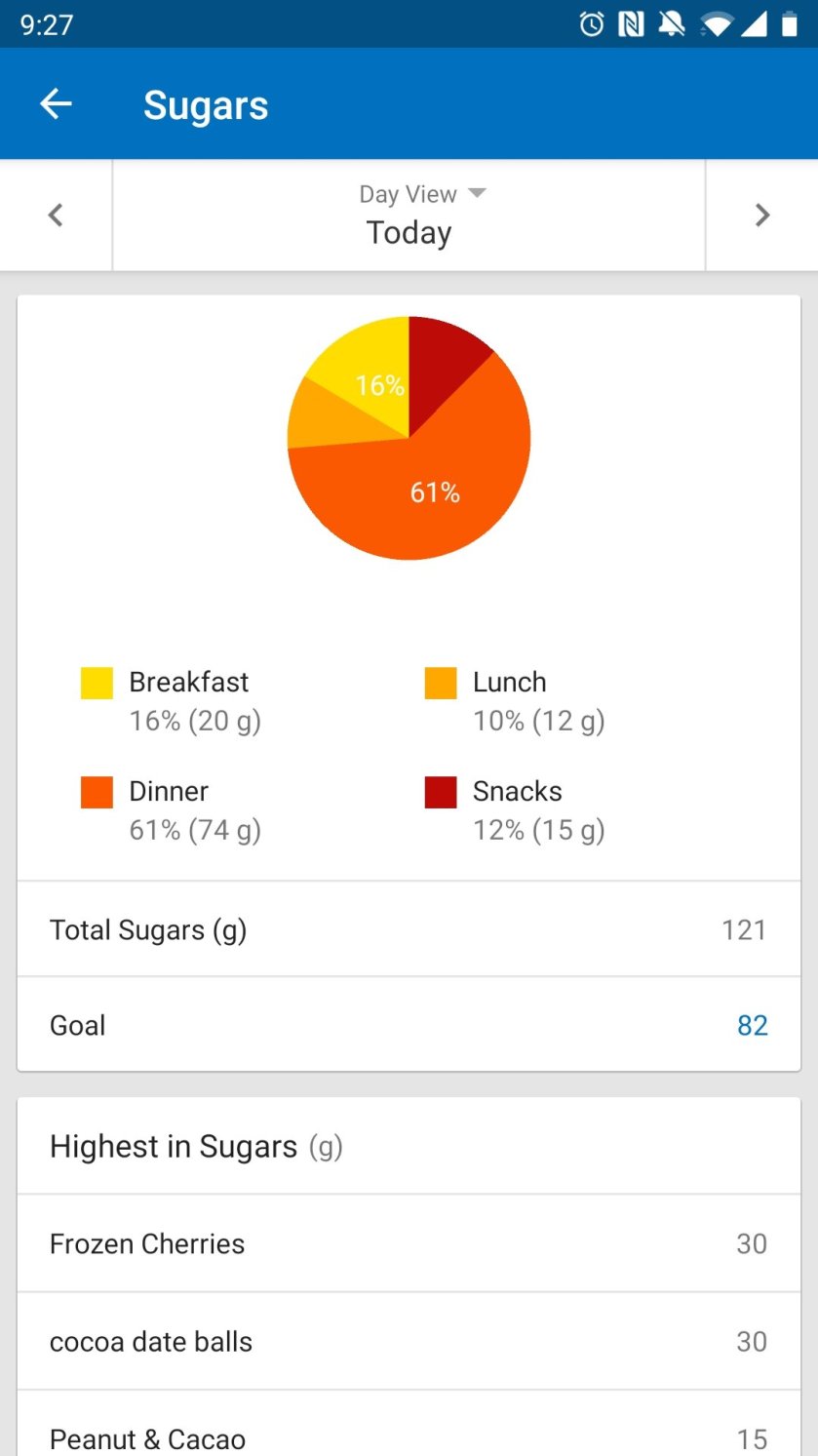 As those of you who have been following know, the aim and point of this sugar free and booze free year is to raise money for and awareness of a rare cancer causing genetic disorder:- Cowden Syndrome. My daughter has it and it caused her to develop cancer at ten. The ripple effect on the family is still being felt particularly by one of her brothers who developed coping mechanisms that now are making him very unwell.

Last year I focused on exercise, this year the focus is on giving up. Specifically giving up two common substances that can increase in their own way the risk of cancer. Alcohol and sugar. Today’s post is about sugar.

I did a quick calculation last night and my average total daily sugars for the last 3 weeks have been 52g per day. Before this I was hitting 65 to 70 a day so a not insignificant drop.

Of course all of the sugar I’m now getting is part of a fruit, vegetable or other whole food rather than being removed and granulated.

What’s shocking to think is that one single can of coke contains 35g just one.

A can of monster energy contains 55g that’s the total amount of sugar I’ve been getting every day in one single drink.

Now I do not believe that sugar either directly causes cancer or feeds cancer specifically. Glucose however feeds every cell in the body and fast dividing cells demand the most energy. Hence the belief that “sugar feeds cancer” and a sugar free diet starves it. Sadly not that simple.

But it is an irrefutable fact that a high sugar diet is a cause of diabetes, metabolic syndrome, non alcoholic fatty liver disease as well as playing a large part in obesity.

That is the link to cancer, a high sugar diet is a causative factor in diabetes and obesity. Looking at diabetes first, diabetes as well as being itself highly debilitating increases the risk of a number of cancers

“Studies have shown that diabetes carries an increased risk for a number of different forms of cancer.

Having cancer with diabetes can make achieving good diabetes control much more difficult but this can be relieved to some extent.
How is type 2 diabetes linked with cancer?

One theory for why a link may exist is that high levels of circulating insulin (known as hyperinsulinemia) can promote the growth of tumours.

Another reason why a link may be present is where a harmful lifestyle may lead to obesity and therefore higher risks of both type 2 diabetes and cancer.
Cancer and type 2 diabetes

The risks of contracting the following cancers are shown to be doubled by the presence of type 2 diabetes:

A smaller increased risk, of 20% to 50% is seen for the following forms of cancer.

The one positive is that incidences of prostate cancer are actually lower for people with type 2 diabetes.”

And obesity, a high sugar diet is often a causative factor in obesity which is in turn is linked with increasing risks for numerous cancers.

“Does obesity cause cancer?

Yes, overweight and obesity is the second biggest preventable cause of cancer in the UK- more than 1 in 20 cancer cases are caused by excess weight

Now of course there are other factors, there always are and you can do everything “right” and still have something awful happen. Let’s be honest you don’t need to tell my family that, my daughter developed cancer at 10 just because her genes are bollocksed. But the link to serious health issues and refined sugar, particularly in excess are clearly there and let’s be honest it’s hard to not have sugar in excess nowadays, especially growing up in a world where one energy drink contains twice the total recommended added sugars given by WHO guidelines.

4 March 2015 ¦ Geneva – A new WHO guideline recommends adults and children reduce their daily intake of free sugars to less than 10% of their total energy intake. A further reduction to below 5% or roughly 25 grams (6 teaspoons) per day would provide additional health benefits.”

Full details on recommendations below.

Without sounding evangelical, 3 weeks in and in the middle of a really traumatic time in my life I’m living without added sugars and my total sugars are a respectable level even with lots of fruit. It’s not actually as difficult as it’s made out to be, pretty much involves a little more cooking and carrying nuts!

We particularly need to stop our kids thinking that growing up saturated in sugar is in anyway normal.